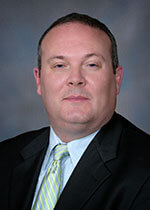 Dr. Edward Fitzpatrick originates from Louisville, Kentucky and received his Bachelor of Science degree in 1993 from Xavier University, Cincinnati, Ohio. He received his Doctor of Podiatric Medicine degree from the Ohio College of Podiatric Medicine, Cleveland, Ohio in 2002 and was listed on the Dean’s List on four separate occasions and named a PICA scholar in 2001.

During his training at Beth Israel Deaconess Medical Center he was selected to serve as a faculty member at Harvard Medical School as a Clinical Fellow and took part in the training of future medical school students. Dr. Fitzpatrick assisted in four separate clinical trials in research on diabetic foot infections and wound care management. He is a contributing author to “The Diabetic Series: Answer Book” published in 2004.

Following residency, Dr. Fitzpatrick relocated to Springfield, Virginia, where he practiced podiatric medicine and surgery with the Kaiser Permanente Group from 2005-2009. He was on staff at Inova Fairfax Hospital and assisted in the training of the current residents.